The Psalmist wrote in Psalm 118:19—“Open to me the gates of righteousness: I will go through them, and I will praise the LORD.”

Tragically— when it comes to the sin of sexual lust—the gates of righteousness fail to open before numerous believers.  Despite an overwhelming amount of information, teaching and discussion available on the internet and from other sources, the means to overcoming this sin remains out of reach for them.  The result is an ongoing failure to live righteously.  Many simply give up all hope for success.

In this book, Jim Vander Spek targets the often baffling topic of lust and leads the reader to a gate that will open for those who seriously desire to walk in victory.  In doing so he confronts the insidious plague of sexual sin that is permeating our culture and the church.  Jim demonstrates biblically and practically that victory is possible, while systematically explaining the tools—the weapons if you will—that can lead the believer who is battling evil desires into victory and a walk of righteousness.

Several years ago, Jim and I and several other men from the church I pastored set out to help each other overcome this scourge that each of us had been battling at different levels of severity.   We have all been greatly helped and are walking in victory where we all once thought victory was impossible!

This book courageously brings to light many of the difficult and painful realities we each had to face in our journey out of the bondage, oppression and destructiveness of lust.

I have known Jim since 1985 when he and his family joined Escondido Calvary Chapel where I am the founding pastor.  Over the years, our church has grown and Jim has taken on various leadership roles and maintained an active role.  When Jim and his wife Marsha came to me to talk about problems they were having in their marriage, I agreed to work with Jim on a one-on-one basis in an effort to help him deal with the issue of lust.

Largely unknown to Jim at that time, I was going through struggles that were very similar to his.  Sadly, like him, for years I had not learned how to gain victory over this very common yet destructive sin.  Not only was my spiritual life hindered as a result, but my ability to help others was also diminished.  Fortunately, this did not lead to adultery or similar sins.  Nor did it bring disgrace upon me, my family or my church.  In fact, I am humbled by the fact that God was able to use me in so many wonderful ways in spite of my sin.  Nevertheless, I deeply regret that victory was so late in coming.

As Jim and I worked together to gain a solid biblical perspective and the practical tools needed to overcome lust, we were both changed and this in turn has allowed us to help others.

I vividly recall a conversation I had with another pastor about my problems in this area.  Expecting a sympathetic ear, I told him that I had almost given up hope in gaining real victory over lust.  His response was pointed and direct—my thinking was wrong.  I should not give up.  I needed to continue struggling against this sin.  He was right in saying these things and his words stuck with me.

However, despite the good advice, I still found myself groping for the gate.  I knew in my heart that, in Christ, victory was possible.  However, my brain and my will just weren’t connecting with that truth.  My friend’s counsel was good and right but I still could not “connect the dots.”

As you read further, I hope that you will not only learn as I and countless others have that there is blessed victory over the sin of lust, but also how to go about experiencing it.  Jesus came to remove not only the penalty of sin but also to free us from its bondage.  In bringing victory into my life, He has brought with it joy, peace and the ability to better serve others.

May our gracious Savior do a cleansing and transforming work in your life as well and may you become more than a conqueror through Him who loves us. 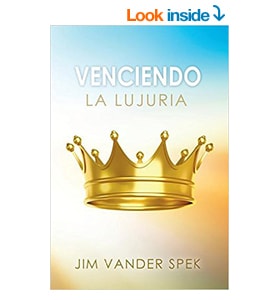